The Minister for the Environment, Community and Local Government, Phil Hogan T.D. visited Platin Works in Drogheda on June 25th to mark the achievement of replacing 50% of the fossil fuels, needed for cement production, with alternative fuels.

Minister Hogan conducted an extensive tour of the facility including the plant’s Control Room where the entire manufacturing process is centrally monitored and managed. He also travelled to the top of the 123 metre high pre-heater tower with panoramic views of the local countryside. The Minister saw first-hand how increased use of alternative fuels with lower carbon emissions reduces the company’s reliance on imported fossil fuels. The fuels are used to fire the cement kilns, where temperatures can reach up to 2000°C. The alternative fuel being used in Platin is Solid Recovered Fuel (SRF) and it is made from shredded mixtures of paper, plastics, textiles and other materials that cannot be recycled. 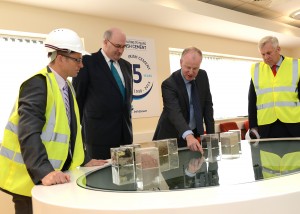 This is the latest in a series of resource and process efficiency achievements in Platin works which have been facilitated by significant investments – most recently the €200 million Kiln 3 facility. Platin is one of the most modern and efficient cement manufacturing plants in Europe and the largest facility of its kind in Ireland producing cement for both the domestic and European markets.