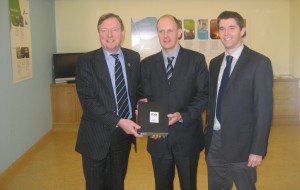 They were received by Pat Creagh, Operations Director, and were taken on a tour of the plant and control centre.

Richard Coakley has adopted the theme ‘Harnessing Energy’ for his term as President of ICE and the group were impressed by the recent developments undertaken at Platin Works to improve energy efficiency both in the production process and in CEM II product development.