Whooper Swans over winter in Limerick

The Whooper swan is a winter visitor to Ireland from Western Iceland where they breed during the summer. The 8th International Swan Census completed during January 2020 recorded 19,111 Whooper Swans throughout Ireland. Some of the Whooper Swans over-winter along the Shannon Estuary with approximately 200 spending their time on the Irish Cement farmland in Cooperhill. The main advantages of this location for the swans are the fields of lush pastureland surrounded by water-filled drainage ditches and streams. This provides undisturbed feeding and roosting for the flocks.

To understand the migration patterns and behaviours ornithologists from the UK, Iceland and Ireland have for many years been putting easily identifiable leg rings on some of these swans. The data from field observations of these ringed swans has revealed that they travel to the same areas each winter with one swan which wintered in Cooper estimated to have flown over 50,000 kilometres from Iceland to Ireland over a 15-year period. The swans will remain on the Irish Cement land until mid to late April when they will begin their northward journey once again. 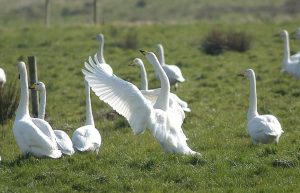